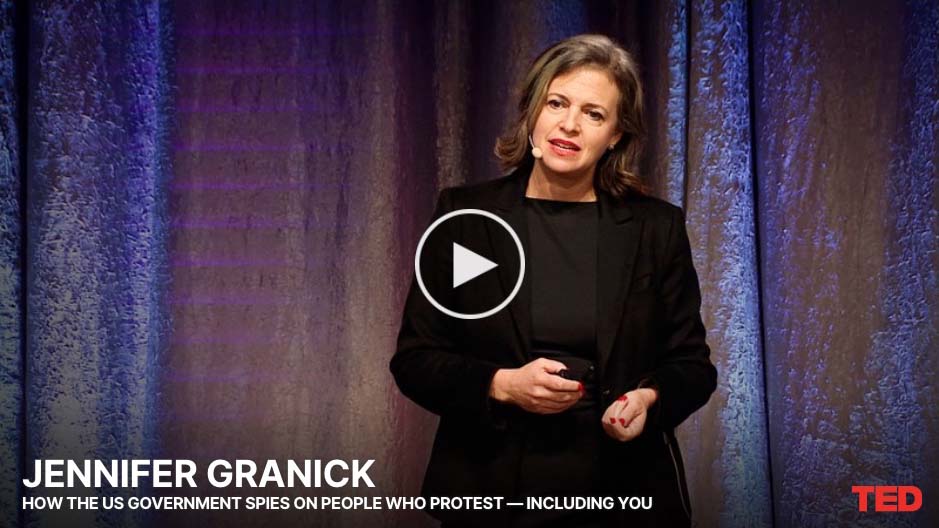 August 31, 2017
“How the US government spies on people who protest — including you” is the title of Jennifer Granick’s TED Talk featuring the research and ideas in American Spies.
← American Spies "best single book" for understanding U.S. surveillance 2016 Palmer Civil Liberties Prize →

Christopher J. Coyne, Professor of Economics at George Mason University has reviewed American Spies and says “To date, it is the best single book I have read for understanding the breadth of the U.S. government’s surveillance operations.” Read more of the review in his recent essay “A Review Essay of American Spies: Modern Surveillance, Why You Should Care, and What to Do About It by Jennifer Stisa Granick (New York: Cambridge University Press, 2017) & Unwarranted: Policing Without Permission by Barry Friedman (New York: Farrar, Straus and Giroux, 2017)”

This is what you need to know about government surveillance

Reining In Warrantless Wiretapping of Americans

New article for The Century Foundation:

In my book, American Spies: Modern Surveillance, Why You Should Care, and What To Do About It, I explain the dangers that massive collection of information about Americans poses to our democracy. Soon, there will be an opportunity to rein in some of this surveillance. In December 2017, one of the laws enabling the National Security Agency (NSA) to warrantlessly wiretap Americans’ international communications and to gather foreigners’ private messages from top Internet companies will expire. The expiration forces Congress to decide whether to renew the law, reform it, or kill it. Because the surveillance law allows spying so far afield of national security interest, critics argue that it should be markedly curtailed, or allowed to end.

Have you bought your copy of American Spies yet?

Dr. Ann Cavoukian, former Information and Privacy Commissioner for the Canadian province of Ontario and Executive Director of the Privacy and Big Data Institute at Ryerson University, says American Spies is an “excellent book” that “will open people’s eyes.”

Information security professional Ben Rothke writing for RSA Conference blog writes “for anyone who wants to understand what lead Edward Snowden to leak classified information, the book is an absolute must read.”

Ars Technica’s review states that, “despite being geared largely toward attorneys and academics, American Spies can be easily understood by anyone” and that Granick ” is one of the premiere legal minds currently trying to grok the intersection between surveillance, privacy, and public policy.”

So what are you waiting for? Purchase your copy of American Spies today.

Read Ben Rothke’s review of American Spies at RSA Conference blog. He calls it an important book and “a well-researched expose.”